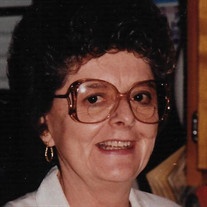 Winnie was born on January 28, 1931 in Thayer, Missouri to Andrew Burrell and Sylvia Cleo (Daily) Huffman. She was united in marriage to Francis Dale Murry in Odessa, December 30, 1949. They purchased real estate in Odessa, and owned and operated several successful businesses together. Their main endeavor was Morgan’s Restaurant, purchased in 1980, an icon in Odessa which she ran until 2015. When Winnie's daughter-in-law, Karen Crews Murry passed away from cancer in 1984, she stepped in and helped her son Bill raise her two granddaughter’s, Jennifer and Kali. She referred to Jennifer and Kali as "My Girls"; they were the pride and joy of her life.

Winnie's only Great Grandson, Nicholas Dunkeson was the sunshine of her life. She enjoyed babysitting Nicholas, spending days teaching him to read before entering pre-school. They were very close. They passed many days away enjoying each other's company, reading, cooking, baking and playing the piano.

In her later years, she enjoyed playing cards with her friends, and crocheting gifts for her family and friends. She was a real sports fan and enjoyed watching the Kansas City Chiefs and Royals games. She was an avid book reader.

In addition to her parents and husband, Winnie is preceded in death by her sister Burrelene Poulette; and her Daughter-in-law, Karen Crews-Murry.

In lieu of flowers, the family request donation's in Winnie's memory to the VFW Post 5675 in memory of her husband who was a Navy Veteran of WWII or the Lafayette County Cancer Coalitions in memory of her Daughter-in Law Karen. Memorials may be entrusted to the Ralph O. Jones Funeral Home, 306 S. 2nd St., Odessa, MO, 64076, 816-633-5524. Memories of Winnie and condolences for her family may be left at www.ralphojones.com or on our Facebook Page.


To order memorial trees or send flowers to the family in memory of Winnie Oma Murry, please visit our flower store.