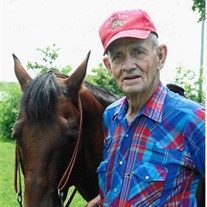 William "Bill" Francis McCoy, 88, of Centerview, Missouri passed away July 17, 2018 at Country Club Care Center, Warrensburg. Visitation will be Friday, July 20, 2018 from 6:00 to 8:00pm at the Ralph O. Jones Funeral Home. Memorial service will be Saturday, July 21, 2018 at 10:00am at Mt. Tabor United Methodist Church. Inurnment will be in Mt. Tabor Cemetery. Memorials may be made to Kindred Hospice or Mt. Tabor Church.

Bill was born September 29, 1929 to Thomas and Lucinda (Wilcoxon) McCoy. He graduated from Odessa High School and served in the United States Army. On August 26, 1951 he married Mary Kathryn Whitsitt in Odessa. After almost 65 years of marriage, she preceded him in death on August 8, 2016. Bill was a member of Mt. Tabor United Methodist Church and served on many committees. Bill was considered "Grandpa" to many neighborhood children. He enjoyed horses and bluegrass music.

He was preceded in death by his parents, his wife, and two sisters, Dorris Willard and Miriam Cox.


To order memorial trees or send flowers to the family in memory of William F McCoy, please visit our flower store.