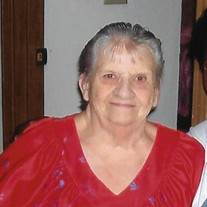 Virginia Ruth Slee, 86, of Lexington, passed away December 15, 2018 at Riverbend Heights Nursing Home. Visitation will be Tuesday, December 18, 2018 at Walker Nadler Fuller Funeral Home from 1:00 pm until 2:00 pm. Graveside service will also be on Tuesday at 2:00 pm at Machpelah Cemetery, Lexington. Memorials may be made to the American Lung Association.

Ruth was born December 28, 1931in Napton, Missouri to Guy and Bessie Mae (Powers) Nichols. She married Charles Albert Slee February 24, 1950 in Marshall. He passed away January 17, 1999. Ruth had worked in housekeeping at the Lafayette Manor Nursing Home.


To order memorial trees or send flowers to the family in memory of Virginia Ruth Slee, please visit our flower store.