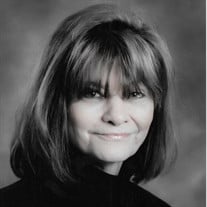 A visitation will be held from 5:00 p.m. to 7:00 p.m., Thursday, September 16, 2021, at Ralph O. Jones Funeral Home, 306 S. Second Street, Odessa, MO, 64076, 816-633-5524. A memorial service will be held at 7:00 p.m. at the funeral home. An inurnment will take place at a later date at the Big Creek Cemetery in Bosworth, MO. Memorials are suggested to Wellington-Napoleon Band and Drama Department. Memories of Vicki and condolences for her family may be left at www.LedfordFamilyFH.com or on our Facebook Page.

Vicki was born on December 14, 1956, to Robert “Bob” Allen and Demma Jo (McFadden) McAfee in Carrollton, MO. She was a 1974 Odessa High School graduate. In March of 1975 Vicki was united in marriage to Steve Stubblefield. From their marriage she was blessed with two children, Stefanie and Vincent, who were her world. Steve and Vicki later divorced. She received her nursing degree from Penn Valley Community College in 1991 and worked for Truman Medical Center West for seven years before finding her work home at Lafayette Regional Health Center where she worked for 23 years. Prior to retiring in 2020 Vicki worked as a traveling nurse. She touched many lives personally and professionally. Outside of nursing Vicki was a dedicated patron of the arts, enjoyed gardening, the Kentucky Derby, talking politics, Turner Classic Movie Marathons, and loved a good book while sipping a cup of coffee. She was a member of Townmount Baptist Church of West Frankfort, IL. Her quick wit, belly laugh, and huge heart will be sorely missed.

In addition to her father, Robert McAfee, Vicki was preceded in death by a brother, Doug McAfee; a brother in infancy; and a sister in infancy.


To order memorial trees or send flowers to the family in memory of Vicki Lee Stubblefield, please visit our flower store.