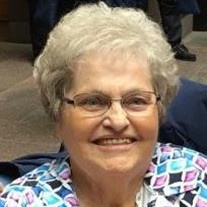 Funeral services will be held at 1:00 p.m., Thursday, November 30, 2017 at the Wellington United Methodist Church, 601 MO-131, Wellington, MO, 64097. Visitation will be held from 12:00 p.m. to 1:00 p.m. Thursday at the church. Burial will be in the Missouri State Veterans Cemetery in Higginsville, MO. Memorials are suggested to the Wellington United Methodist Church. Memories and condolences for the family may be left at www.ralphojones.com or on our Facebook Page. Arrangements have been entrusted to the Ralph O. Jones Funeral Home, 306 S. 2nd St., Odessa, MO, 64076, 816-633-5524.

Raye was born on July 7, 1944 in Chillicothe, MO to James Edward and Clara Eileen (Long) Scott. She graduated in 1962 from Chillicothe High School. After graduation she worked for a short time at Wade’s Restaurant and Kime’s Restaurant as a cook. Raye then moved to Wellington, MO and on December 19, 1964 she married Chester Allen Spaw in Wellington, MO. He preceded her in death on February 17, 2012. After raising her family, Raye joined Chester in working for the Wellington School District as a Custodian. She was a member of the Wellington United Methodist Church, Wellington PTA, TOPS Club, JYBW, and the Wellington Fair Committee. In addition to spending time with her family and friends, Raye enjoyed sewing, cooking, baby sitting, and spending time with her Yorkie, Cuddles and her cat, Lily Raye.

In addition to her parents and husband, Raye was preceded in death by a son, James Spaw; two brothers, Danny and Doug Scott; two sisters, her twin sister, Myrna Kaye Lewis and Sherry Scott; two nephews, Andy Salyer and Riley Minnis; and a niece Katie Scott.

Raye’s family would like to thank One Community Hospice and her care givers, Angelina, Janice, Stacy, Tammy and Stephanie.


To order memorial trees or send flowers to the family in memory of Verna Raye Spaw, please visit our flower store.