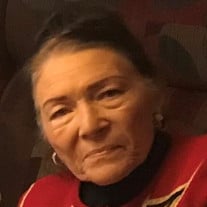 A visitation will be held from 5:00 p.m. to 7:00 p.m. on Monday, January 25, 2021 at Ralph O. Jones Funeral Home, 306 S. Second Street, Odessa, MO, 64076, 816-633-5524. Masks are required. A funeral service will be held at 1:00 p.m. on Tuesday, January 26, 2021 at the funeral home. Burial will follow at Waverly Cemetery in Waverly, MO. In her honor, the family suggests that memorial contributions be made to Waverly Cemetery Association. Online condolences and fond memories of Betty may be expressed to www.LedfordFamily.FH.com or on Ralph O. Jones Funeral Home Facebook Page.

Betty was born on February 6, 1941 in Waverly, MO, the first of three children, to William Eldon and Christine Viola (Maycock) Weedin. She Graduated from Lexington High School. On June 15, 1962 Betty was united in marriage to Francis “Frank” Monroe Fulkerson II in Higginsville, MO. To this union two children were born: Francis “Frank” M. III and Elizabeth Christine “Christy.” Betty worked as a dental assistant. She was a valued member of the Kingdom Hall of Jehovah’s Witnesses whereby she was a faithful member and servant. In addition to spending time with family and friends, Betty was an avid Kansas City Chiefs fan and enjoyed watching them make it to and becoming the Superbowl LIV champs.

Betty was preceded in death by her parents and husband, Francis Monroe II on August 22, 2014.


To order memorial trees or send flowers to the family in memory of Thelma Elizabeth "Betty" Fulkerson, please visit our flower store.