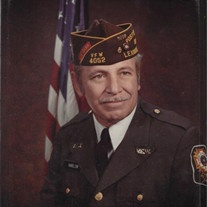 Steven King Harlow, 83, of Lexington, passed away October 22, 2018 at Riverbend Heights Care Center, Lexington. In lieu of flowers, memorials may be made to the VFW or the Elks.

Steve was born March 10, 1935 in Lexington to Edwin and Maxine (King) Harlow. He married Naomi (Lawson) Harlow in 1977. He served in the United States Navy. He retired, after several years, from Lake City. Steve was a lifetime member of the VFW, the Elks, the American Legion and the NRA.

He is survived by his children, Cassie Santoro of Lexington, Michelle "Chelley" Harlow of Arkansas and Vicent Guzowski of Branson; and several grandchildren and great grandchildren. He was preceded in death by his wife, Naomi Harlow his sister, Sandy Harlow, and granddaughter Amanda Santoro.


To order memorial trees or send flowers to the family in memory of Steven Harlow, please visit our flower store.