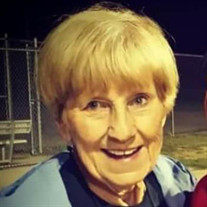 Stephany Ann Brame James was born on March 28, 1937 to John M. and Anna Margaret Ervin Brame in Marshall, Missouri. Stephany was raised in Marshall with her brother, J.M. Brame.
Stephany was a homemaker and a seamstress at The Odessa Garment Factory before going to work at Marion Laboratories in Kansas City where she worked for 20 years before retiring.
Stephany passed away at Centerpoint Medical Center, Independence, Missouri on August 26, 2017.
Stephany was raised Presbyterian and she was proud to pass on her faith’s heritage to her children. Stephany was a member of New Horizon Presbyterian Church where she served as a Sunday school teacher and an elder. She was also a member of Presbyterian Women. She often told her teen-aged daughters, “If you’re going to hoot with the owls on Saturday night you better be able to soar with the eagles on Sunday morning!”
She had a wildly funny sense of humor and could always be counted on for a good laugh. She was a gifted story teller and was most often the center of attention. It didn’t matter how busy she was, she always made time for anyone who needed her and she had a special way of making you feel like the most important person in the world. Stephany took pleasure in having a large garden and canned enough vegetables to sustain her family over the winter months. She delighted in sewing and was an accomplished seamstress. Stephany was a loyal Kansas City Chief’s fan and held season tickets for many years. She loved all Odessa High School sports but was recently most fond of Odessa Baseball. You could always find her behind home plate watching her youngest grandson play ball no matter what the weather.
Stephany’s daughters were the light of her life and she loved every minute of being a mother. It was her pleasure to donate her time and talents to organizations her girls were involved in because she wanted to be part of all the fun. She was a Girl Scout leader for 13 years where she encouraged young girls and was an advocate for girl power before it was cool.
Her daughters began showing horses in 1970 and as always Stephany was right there behind them. She joined 4-Star 4-H and the Odessa Saddle and Bridle Club. She worked many hours in the cook shack and made all of their riding clothes including a matching saddle blanket fringe for the horse.
Stephany watched her daughters in their high school activities and was a Pep Club sponsor.
In 1981 the first of her six grandchildren arrived. She often said if she’d known grandkids were this much fun she would’ve had them first. This was a wonderful time for her and she often joked about how smitten she was with the grandsons after having five girls of her own, but she really doted on each and every one. She was always there to bring a forgotten lunch to school or give a ride to a practice. She was their biggest cheerleader but most importantly she was an excellent listener, a secret keeper and always gave the best advice.
It was not always just about family, though. She treasured many lifelong friendships to include the members of her unchartered and informal “Old Hens’ Club” that got together frequently to laugh, tell stories, commiserate, and generally support each other. Stephany found much humor and enjoyment in an ordinary life well-lived.
Stephany is preceded in death by her parents, brother and also a daughter, Linda S. Monahan.
Survivors include four daughters and their spouses: Terry and Mike Stuckey, Lone Jack, MO. Kim and Bob Jeffery, Odessa, MO. Suzie Moore and Mike Whited, Odessa, MO. Doni and Scott Windsor, Odessa, MO.
Six grandchildren: Amy and Billy Mackie, Higginsville, MO. Brandi and Sean Leslie, Odessa, MO. Michael and Jenni Moore, Spring Hill, KS. Clayton Moore, Salt Lake City, Utah. Austin and Stephanie Windsor, Odessa, MO. Logan Windsor, Odessa, MO.
10 great-grandchildren: Ava and Ella Mackie, Higginsville, MO. Cael and Cade Leslie, Odessa, MO. Anson, Gentry and Titus Moore, Spring Hill, KS. Natalie Grace Windsor, Odessa, MO. Dylan Stuckey, Prairie Village, KS. Landon Whited, Odessa, MO.
Visitation will be held from 10:00 a.m. to 12:00 p.m. on Saturday, September 2, 2017 at the New Horizon Presbyterian Church, 4266 MO-131, Odessa, MO, 64076. A Celebration of Life will immediately follow at 12:00 p.m., Saturday, September 2, 2017 at the Church. In lieu of flowers the family suggests memorials to New Horizon Presbyterian Church, Odessa, MO. Memories and condolences for the family may be left at www.ralphojones.com or on our Facebook Page. Arrangements have been entrusted to the Ralph O. Jones Funeral Home, 306 S. 2nd St., Odessa, MO, 64076, 816-633-5524.


To order memorial trees or send flowers to the family in memory of Stephany Ann James, please visit our flower store.