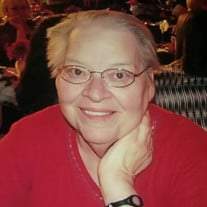 Shirley Jean Ellison, 82, of Lexington passed away April 28, 2020 at her home. Due to current circumstances, the family will have private services. Burial will be in Lexington Memory Gardens Cemetery. Memorials may be made to the family in care of Shirley Kumm. Memories and condolences may be left at www.LedfordFamilyFH.com.

Shirley was born April 19, 1938. She was raised in Lawson, Missouri by her parents, Bill and Myrtle (Wormsley) Stockton. She worked as a CNA for Lafayette Manor Nursing Home, being recognized many times as Employee of the Month. She retired after 37 years. She married Clarence Ellison in Lexington on October 31, 1953. He preceded her in death on December 28, 2002. At the age of 55 she received her High School diploma and her driver’s license. Shirley was a member of Kingdom Hall Jehovah’s Witness in Bates City and enjoyed spending time with her family.


To order memorial trees or send flowers to the family in memory of Shirley Jean Ellison, please visit our flower store.