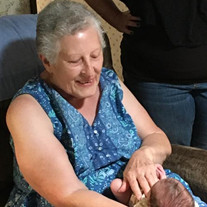 On her own terms, Sheila Faye Davis passed into rest the afternoon of March 18, 2019, with husband Jim by her side. Born in Lexington on November 8, 1944, to Guy Adolphice and Elizabeth Alice (Willard) Brooks, Sheila lived most of her life in the same country spot, first on the Brooks family place, and then on the neighboring property with Jim and their sons. Sheila and Jim were married in the Brooks house on June 8, 1963. She is predeceased by her parents and brother-in-law Doug Adkison.
A graduate of Mayview High School, Sheila was very active in the Mayview community. She was a member of the Prairie Valley Extension Club, as well as a parent supporter of the 40-Ville 4-H Club and Mayview PTA. Later on, she enjoyed bowling in the weekly leagues at the Higginsville Bowl, as well as cards with the Monday Afternoon Pinochle Club in Lexington.
In addition to Jim, Sheila is survived by her sons Dave (Ken) of Guerneville, California and Derek of Chicora, Pennsylvania; granddaughters KayLee (Joe) of Wellington and Jessi (Will) of Napoleon; and great-grandchildren Jayd, RhiLee, and Kindred. She is also survived by her siblings and spouses George and Jean Brooks of Overland Park, Kansas, Virgie and Bill Stratton of Lexington, Karen Adkison of Lexington, John Brooks of Aullville, and Bob and Carol Brooks of Lexington, as well as dozens of nieces and nephews. Sheila will also be missed by her Davis and Gould family in Pennsylvania.
A graveside service will be conducted on Friday, March 22, 2019 at 2:00 pm at the Missouri State Veterans Cemetery, Higginsville. In lieu of flowers, the family prefers that contributions be made in Sheila's memory to Special Olympics Missouri/Central Area (www.specialolympics.org/Missouri <http://www.specialolympics.org/Missouri>) and Visiting Nurses Association - Kansas City (vnakc.org).


To order memorial trees or send flowers to the family in memory of Sheila Faye Davis, please visit our flower store.