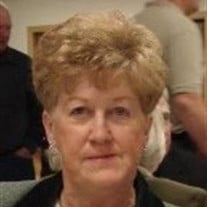 Ruth Alice (Fischer) Clark, 82, of Odessa, Missouri, passed away on Tuesday, May 10, 2022, at home surrounded by her family and friends.

Graveside Services will be held Saturday, May 14, 2022, at 3:00pm at Memory Gardens Cemetery, Lexington, MO. In lieu of flowers memorials may be directed to Preferred Hospice of Lexington and can be left in care of the funeral home. Memories of Ruth and condolences for her family may be left at www.LedfordFamilyFH.com or on our Facebook Page. Arrangements have been entrusted to Walker-Nadler-Fuller Funeral Home, 1720 South Street, Lexington, MO, 64067, 660-259-2245.

Ruth was born on April 14, 1940, the daughter of Otto and Ona Fischer, she was raised near Carrolton, MO. She attended a one room schoolhouse during her early years called Mayview and later graduated from Carrollton High School in 1958. Ruth's work ethic was widely known and one of her many strengths, having worked for over 65 years of her life. Her career began at Dunbrooke Shirt Factory in Lexington, MO, right after high school graduation. She then went to work for AT&T in Lees Summit, MO, and retired after an impressive 32 years. Retirement did not last long, as Ruth soon went to work at Dillard's in the women's clothing department for 10 years, as she wanted to try something different. Never one to sit around, Countryside Restaurant hired her, and she worked there for several years. The Apple Bus Company and Patricia's Foods also enjoyed Ruth's dedication to her job. Many of her closest friends were her co-workers who admired her discipline and her personality. Ruth always loved staying busy and being productive.
She was known to many of her family and friends as, "Turtle." This nickname was earned because she was never in a hurry, but always got the job done. She embraced this nickname and started collecting turtle figurines. She collected well over 100 unique turtles of many different sizes, materials and styles. She also collected flower frogs, teacups and saucers and her favorite collection of all, was her Elvis memorabilia. Ruth was a die-hard Kansas City Chiefs fan and KU Basketball fan. She was talented in the kitchen and loved to bake. Those of you lucky enough to have tasted her famous blackberry cobbler, know this to be true. Her failproof pie crust recipe was her guarded secret.

Ruth was preceded in death by her parents, Otto and Ona and her siblings, Fern Klausing, Mary Willey, Virginia Dunn and Kenneth Fischer.


To order memorial trees or send flowers to the family in memory of Ruth Alice Clark, please visit our flower store.