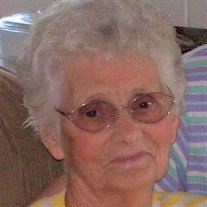 Ruby was born on October 25, 1927 to Robert and Clara Bell (Mayer) Ballard in Iconium, MO. On October 15, 1949 she was united in marriage to Ralph Prier in Osceola, MO. He preceded her in death. Throughout the years Ruby worked at Odessa Cleaners, Action Products, in the kitchen and housekeeping at a nursing home in Odessa, and as a homemaker on their family farm. She was a Baptist by faith. In addition to spending time with family and friends, Ruby enjoyed gardening and working outdoors.


To order memorial trees or send flowers to the family in memory of Ruby Margaret Prier, please visit our flower store.