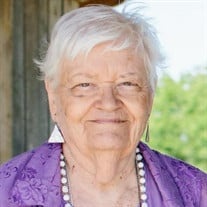 Visitation will be held at 1:00 p.m., Friday, March 6, 2020 at the Ralph O. Jones Funeral Home, 306 S. 2nd St., Odessa, MO, 64076, 816-633-5524. Funeral service will follow at 2:00 p.m. at the funeral home. Burial will be in the Greenton Cemetery. Memorials are suggested to the George J. & Hilda Meyer Foundation: Attention Nursing Education Fund. Memories of Rosemary and condolences for her family may be left at www.LedfordFamilyFH.com or on our Facebook Page.

She was born to C. Loyd And Margaret (Amor) Gover on February 6, 1936 in Mayview MO. She graduated from Mayview High School in 1955. She was a member of the First Baptist Church-Mayview. Rosemary was first employed at Libbus Grocery in Lexington MO. She then worked at Western Electric (AT&T) in Lee’s Summit MO for the next thirty years until her retirement. She moved back to Mayview to care for her elderly mother. Rosemary moved to John Knox after her mother’s death twenty-five years ago. Rosemary enjoyed traveling with friends and genealogy. She belonged to the Historical Society in Higginsville and Mayview.

In addition to her parents, Rosemary was preceded in death by a brother, James A. Gover; a niece Linda West and a brother-in-law, Hubert West.


To order memorial trees or send flowers to the family in memory of Rosemary Gover, please visit our flower store.