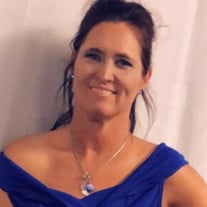 Robin was born March 19, 1967 in Kansas City, Missouri to Bobbie and Kissie (Pankey) Williams. After high school she attended Heritage College and earned a degree in Massage Therapy. She was currently working for Landis + Gyr in Lenexa, Kansas. She married John Hicklin July 3, 1993 in Lexington. She enjoyed ghost hunting in addition to spending time with her family, grandkids and friends.

Survivors include, her father, Bobbie Williams; children, John Hicklin, Jr., Scott Hicklin and wife Megan, and Stephanie Hicklin, all of Bates City; brothers, Robert Williams and wife Erainia of Centerview and Brian Williams and wife Linda of Levasy; sisters, Debbie Hicklin and husband Duke of Odessa, Nancy Hicklin of Odessa and Billie Renfro of Olathe, Kansas; and eight grandchildren. She was preceded in death by her mother, Kissie Williams, and granddaughter, Brenlee Gilbert.


To order memorial trees or send flowers to the family in memory of Robin Ann Hicklin, please visit our flower store.