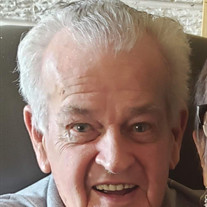 Robert Wayne Simkins, 87, of Higginsville passed away February 7, 2021 at Meyer Care Center.  Arrangements have been entrusted to Walker-Nadler-Fuller Funeral Home, 1720 South Street, Lexington, MO  64067, 660-259-2245.  Memories and condolences may be left at www.LedfordFamilyFH.com.

Bob was born January 7, 1934 in Chillicothe to Albert and Iva (Anderson)Simkins.  He worked as a truck driver.  On December 17, 1985 he married Donna Butler in Liberty.  He enjoyed traveling, yardwork, dancing, painting and making people laugh.

Survivors include his wife, Donna Simkins, of the home, children, Debra Lavatai and husband Lonnie of Lakewood, California, Lori Reicher of Higginsville, Kimberly Briggs of Concordia and Stanley McGroarty, Jr. of Olathe; eight grandchildren and numerous great grandchildren.  He was preceded in death by his parents; daughter, Terry Garrison and sister Norma Jean.


To order memorial trees or send flowers to the family in memory of Robert Wayne Simkins, Sr., please visit our flower store.