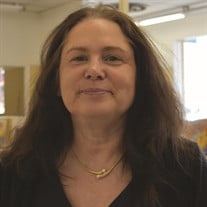 Renee Spaar, 61, Odessa, died March 8, 2022, at her home.
Born August 4, 1960, in Los Angeles, Calif., she was the daughter of Donald Schmidt and Irene Kerr Keeran.
She was a 1978 graduate of California High School and a 1982 graduate of Southwest Missouri State University, Springfield, with a Bachelor of Science in business.
On May 8, 1988, she married Joseph Spaar in Odessa.
She was office manager for The Odessan, for more than 20 years. She developed the Newspapers in Education program for The Odessan.
She was a founding member of Odessa Outreach and a member of Beta Sigma Psi Alpha Epsilon Alpha chapter.
Her father, her stepfather, Max Keeran, her father-in-law, George Spaar, and her mother-in-law, Betty S. Spaar, preceded her in death.
Survivors include her husband, of the home; two daughters, Hannah Spaar, Odessa, and Hallie Jo and Donald Aulbert III, Lee’s Summit; her mother, Centertown; a sister, Rhonda Schmidt, Brawley, Calif.; a brother, KayDon Schmidt, California; and a grandson, Jonas Hadley Aulbert.
Visitation will be held from 2-4 p.m., Saturday, at Ralph O. Jones Funeral Home.
Family suggests memorials to Odessa Outreach.


To order memorial trees or send flowers to the family in memory of Renee (Schmidt) Spaar, please visit our flower store.