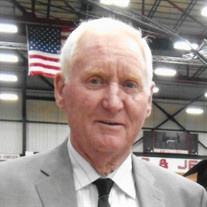 Red was born on March 26, 1943 in Brumley, MO to Clyde Neal and Hazel (Johnson) Neal. He graduated high school in 1960 from School of the Osage at the Lake of the Ozarks, Missouri. Red was united in marriage to Vinita Gene Berry on November 10, 1990 in Brumley, MO. He was a member of the First United Methodist Church in Odessa, MO. After 42 years of service, Red retired in October 2006 as a union meat cutter from Cosentino’s Price Chopper and Union Local Two. Red spent many years as a state high school referee for football and basketball and coached little league football. In addition to spending time with family and friends, Red was an avid car enthusiast, he enjoyed playing poker, fishing and turkey hunting, and played on a men’s basketball league for many years. Red would start his morning by going to the local convenience stores, service stations, and restaurants, visiting with the many people he knew.

In addition to his parents, Red was preceded in death by four siblings, Addie Mae Barnett, Charlie Neal, Jonnie Neal, and Clydie Neal.


To order memorial trees or send flowers to the family in memory of "Red" Jimmie George Neal, please visit our flower store.