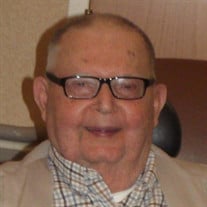 Raymond Dean Manking, 92, of Odessa, Missouri, passed away Tuesday, March 24th, 2020, at the Warrensburg Veterans Home.
Due to the Coronavirus restrictions, no services will be held. Arrangements have been entrusted to Ralph O. Jones Funeral Home, 306 S. 2nd Street, Odessa, Mo 64076, 816-633-5524. Memorial gifts are suggested to the First United Methodist Church, 301 South First Street, in Odessa. Memories of Raymond and condolences for his family may be left at www.LedfordFamiyFH.com or on our Facebook page.
Raymond was born March 14th, 1928, in Odessa, Missouri, to Joe and Minnie (Rodabaugh) Manking. He graduated from Odessa High School in 1946.
He joined the Army in 1948 and was sent to Automotive Mechanic School in Ft. Benning, GA. He was then stationed in Okinawa, Japan & Las Cruces, New Mexico.
Raymond was married to Dorothy Raynes on March 21st, 1949. He took over Manking Oil Company from his father in 1956 and operated it until his retirement in 1985. He was a member of First United Methodist Church in Odessa, a prior member of the Lions Club, and served on the board for the senior citizens apartments.
Raymond was preceded in death by his parents and wife. Survivors include his sister, Helen Bozarth; his children, Lynn (Joe) Robbins, David (Kelly) Manking, Andy Manking; and his grandson, Doug Manking.


To order memorial trees or send flowers to the family in memory of Raymond Dean Manking, please visit our flower store.