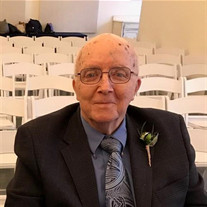 Raymond Frederick Henry Drecktrah, 83, of Napoleon passed away December 10, 2018 at Truman Medical Center, Lakewood. Funeral service will be Friday, December 14, 2018 at 11:00am at St. Paul Church, Napoleon. Visitation will be Thursday, December 13, 2018 from 6:00 until 8:00 pm at the Ralph O. Jones Funeral Home, Odessa. Burial will be in St. Paul Cemetery, Napoleon. Memorials may be made to the St. Paul Cemetery Fund or to benefit Lakewood Long Term Care Center.

Raymond was born April 5, 1935 on the family farm, south of Napoleon, to August Herman and Anita Marie (Jungeblut) Drecktrah. He attended Pleasant Prairie Rural School for eight years and graduated from Wellington High School in the Class of 1953. He was member of St. Paul Church, attending Sunday School and being Confirmed in 1949. He served on the Church Council and as Sunday School Superintendent. He served in the United States Air Force from February, 1955 until December 1958. Raymond married Carolyn Louise Beckemeyer on August 6, 1960. He was hired by Ford Motor Company in July, 1959 and worked for them for 41 years, retiring in 2000. Raymond was a member of UAW 249, a member of AARP and American Legion Borgman-Osthoff Post 134. He was also a lifelong farmer.

He was preceded in death by his parents; three sisters, Evelyn Drecktrah, Bernice Drecktrah and Lorene Dieckman; and brother, Roy Drecktrah.


To order memorial trees or send flowers to the family in memory of Raymond Frederick Henry Drecktrah, please visit our flower store.