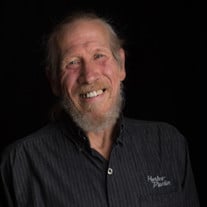 A graveside service will be held on Friday, November 20, 2020 at 1:00 p.m. at the Zion United Church of Christ Cemetery in Mayview, MO. Memorials are suggested to the Zion United Church of Christ Cemetery Association or Bikers Against Child Abuse. Arrangements have been entrusted to Ralph O. Jones Funeral Home, 306 S. 2nd Street, Odessa, MO, 64076, 816-633-5524. Memories of Ray and condolences for his family may be left at www.LedfordFamilyFH.com or on our Facebook Page.

Ray was born on September 23, 1954 in Odessa, MO to Carlie August and Dorothy (Schowengerdt) Begemann. He was a graduate from Odessa High School in Odessa, MO. Ray worked as a mechanic for Armco, GST, and retired from Wilkinson’s Tow. He was a member of the Zion United Church of Christ in Mayview, MO. In addition to spending time with family and friends, Ray enjoyed riding motorcycles, going to Sturgis, bike rallies, fishing, the outdoors, and tinkering with old cars and motorcycles.

Ray was preceded in death by his father, and a brother, Thomas Begemann.


To order memorial trees or send flowers to the family in memory of Ray Lynn Begemann, please visit our flower store.