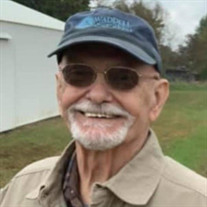 The family will host an inurnment at the Payne Cemetery in Polk, Missouri at a later date. In lieu of flowers donations may be sent to Prairie Chapter DAR c/o Kathleen Mais, 2824 SE Bingham Circle, Lee's Summit, MO 64063, please include “Pete Barnes Donation” on memo section of check. Arrangements have been entrusted to Ralph O. Jones Funeral Home, 306 S. 2nd Street, Odessa, MO, 64076, 816-633-5524. Memories of Pete and condolences for his family may be left at www.LedfordFamilyFH.com or on our Facebook Page.

Pete was born on October 14, 1942 in Manila, Philippines to George Sheldon and Dorothy (Haley) Barnes. After graduating from East High School in Kansas City, MO, he attended Metropolitan Junior College in Warrensburg, MO. On September 3, 1962 Pete was united in marriage to Roberta “Bobbie” Sue (Drury) in Olathe, KS. On September 12, 1966 he was drafted into the United States Army, serving until honorably discharged on August 26, 1968. Pete worked as a drafting engineer for over 15 years and a GE parts specialist for 12 years. He was a member of Mensa, the High IQ Society. In addition to spending time with family and friends, Pete enjoyed restoring vehicles, gardening, music, radio control aircraft, tinkering around, and was an avid Kansas City sports fan.

Pete was preceded in death by his parents and a brother in law, Gervais Payne.


To order memorial trees or send flowers to the family in memory of Peter Sheldon Barnes, please visit our flower store.