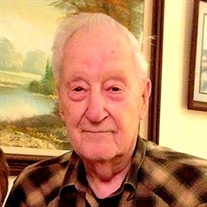 Paul Eugene Phillips, 97, of Kearney, Missouri formerly of Odessa, Missouri passed away on June 1, 2020 at Liberty Health and Wellness in Liberty, Missouri.

Paul was born on January 27, 1923 in Figure Five, Arkansas to Farley Lee and Dona (Dooley) Phillips. He grew up living (without electricity) on a farm in Crawford County, AR with his two sisters and five brothers. As a child life on the farm included not only caring for cows, horses and pigs, but also raising cotton, plowing behind a mule, churning butter and doing all kinds of chores. Paul would walk the nearby hills barefoot in the summer, hunting and using a bean shooter to shoot skunks and birds. He would walk or run 1.5 miles to a four room schoolhouse, where he completed the 8th grade. On November 18, 1942 Paul enlisted in the United States Army. During his time, he served in WWII including campaigns in Normandy, France, Ardennes, Rhineland, and Central Europe. Paul was awarded 5 Bronze Stars, Good Conduct Medal, American Theatre Campaign Ribbon, European African Middle Eastern Theatre Campaign Ribbon, three Overseas Bars, and the Victory Ribbon. After the war ended, Paul was honorably discharged on December 3, 1945. He then started out working as a welder for Allis Chalmers in Independence and worked his way up to Foreman, Lead Man and Inspector General. He retired in 1985 after 35 plus years of service. On August 15, 1949 Paul was united in marriage to Nancy Means in Van Buren, AR after being introduced a year earlier by Nancy’s Aunt Rose. Together they had seven daughters. After living in Independence, they settled on a farm near Odessa in 1958. They raised horses, cows, pigs, corn, chickens, soybeans and hay. He enjoyed coon hunting and raising black and tan coonhounds. He was a member of the American Legion.

In addition to his parents, Paul was preceded in death by his former wife, Nancy; one sister, Edith Coleman; and four brothers, Tom, Jim, Ralph, and Raymond Phillips.


To order memorial trees or send flowers to the family in memory of Paul Eugene Phillips, please visit our flower store.