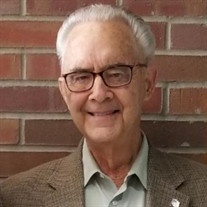 Paul was born in Latham, Missouri on April 24, 1930 to Ernest Lloyd and Mildred Blanche (Moser) Phillips. Paul married his high school sweetheart Marcella Celia (Robinson) Phillips on August 3, 1950 in Kansas City, MO. She preceded him in death on August 26, 2002. He graduated from Northeast High School in Kansas City, MO. Paul was a member and deacon of the Connection Point Church in Raytown, MO. He received his mechanical engineering degree from Finley Engineering College and for the next 37 years worked for Armco Steel in KC, initially as a combustion engineer and later in production management, as superintendent of grinding media. During his Armco years, Paul became an expert in the engineering and production of grinding media, and with Marcella traveled extensively, consulting for and training international partners.

In addition to his parents and wife, Paul was preceded in death by a daughter, Belinda Kay Phillips; two brothers, Richard and Lawrence Phillips and a step-sister, Dixie Seal.


To order memorial trees or send flowers to the family in memory of Paul Edward Phillips, please visit our flower store.