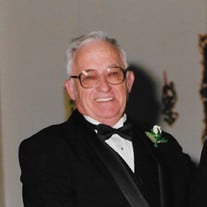 Patrick "Pat" Dan Douglas Flanigan, 85, of Lexington passed away December 9, 2021 at Shirkey Nursing and Rehabilitation Center, Richmond. A private family graveside service with Military Honors will be Tuesday, December 14, 2021 at the Missouri State Veterans Cemetery, Higginsville. Memorials may be made to the Lexington Food Pantry or the American Heart Association. Memories and condolences may be left at www.LedfordFamilyFH.com. Arrangements have been entrusted to Walker-Nadler-Fuller Funeral Home, 1720 South Street, Lexington, MO 64067, 660-259-2245.

Pat was born October 4, 1936 in Dover to William and Anna (Lovell) Flanigan. He graduated from Lexington High School. He served in the United States Army for two years. He was married in 1961 to Barbara Payne. They later divorced but remained good friends. Pat was a manager for Bings and IGA and owned and operated Pat's Quick Stop in Lexington for 16 years. He retired from Arite Produce where he worked as a delivery driver. Pat was a member of the Lion's Club, The Elk's Lodge, the Moose Lodge, American Wholesale Grocers and Tribe Mic-O-Say. He enjoyed going to auctions and traveling.


To order memorial trees or send flowers to the family in memory of Patrick Dan Douglas Flanigan, please visit our flower store.