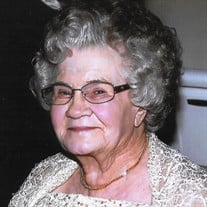 Naomi was born on November 11, 1921 in Moniteau County, Missouri to Arthur and Mary Matilda (Petree) Huff. After high school, she was united in marriage to James Roy Parsons. They later divorced. On December 26, 1953 Naomi was united in marriage to Harold Leslie “Les” Mitchell in Harrison, Arkansas. He preceded her in death. In the 1950’s Naomi worked at the Brookfield Manufacturing Company in Warrensburg, MO, later becoming a homemaker to take care of her family. She was a member of the First Baptist Church of Odessa. Naomi also attend the First Christian Church of Odessa and made many friends. She was a member of many local clubs in her younger years. In addition to spending time with family and friends, Naomi enjoyed sewing, cross stitching, crocheting, quilting, and drawn thread work.


To order memorial trees or send flowers to the family in memory of Naomi Grace Mitchell, please visit our flower store.