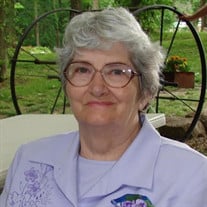 Myrtle was born on January 29, 1931 in Dunn Center, North Dakota to Leonard and Cora (Adams) Eggert. She graduated in 1949 from Odessa High School in Odessa, MO. Myrtle then received her Teaching Certificate from Graceland College in Lamoni, IA. After college she taught in two separate one room school houses until they closed and then for the Mayview School Dist. for 5 years. On May 24, 1953 she married Hubert Dillon at the Odessa Community of Christ in Odessa. They were the first couple to be married in the church after construction was completed. In addition to being a member of the church, Myrtle was an Ordained Priest, Sunday School Teacher, Women’s Leader, Financial Officer and served many other roles within the church. Myrtle and Hubert owned and operated a dairy farm for many years and she was a Homemaker as well.

In addition to her parents and husband, Myrtle was preceded in death by a sister Betty O’Dell.


To order memorial trees or send flowers to the family in memory of Myrtle Louise (Eggert) Dillon, please visit our flower store.