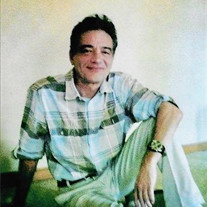 Mitch Allan Landucci, 59, of Higginsville, Missouri passed away February 14,
2018 at Research Medical Center in Kansas City, Missouri. Funeral services will
be Monday, February 19, 2018 at 11 am at the Walker Nadler Funeral Home,
Lexington, MO. Visitation will also be on Monday at the funeral home from 10
am until service time. Burial will be in Memorial Park Cemetery, Lexington.
Memorials may be made to CAR: Cancer Assistance Relief.
Mitch was born February 25, 1958 in Kansas City, Missouri to Virgil Oliver and
Daisy Bell (Vorwark) Landucci. He graduated from Lexington High School in
1976 and earned a BA in Theatre Arts from Benedictine College in Atchison,
Kansas in 1980. Mitch was an Eagle Scout.
Mitch remained active in local theatre productions and was especially proud of
the fact that he played "Big Daddy" in the production of "Cat on a Hot Tin Roof."
He worked as a Substance Abuse Counselor with N.A.R.A. (Narcotics Addicts
Rehabilitation Act). He later became the program manager for Renaissance
West. As a Substance Abuse Counselor for the state of Missouri, he worked for
Missouri Western Mental Health. He was a member of the Association of Fraud
Examiners (CFE) of the Kansas City, Missouri chapter. Mitch obtained additional
education and training through the CFE in health insurance fraud, financial
document fraud from the US Attorney, the National White Collar Crime Center
and the CFE in Austin, Texas.
When his mother, Daisy was diagnosed with Alzheimer's, he went to work as a
manager in the nursing home where she lived. He remained working there until
her death. He later worked as a social worker for the Department of Case
Management for Jackson County, Missouri.
Mitch was a tireless advocate for those who had no voice and those without a
safety net. He was well known in local hospice and nursing centers as one who
took seriously his role of protecting those most vulnerable.
Mitch is survived by his aunt, Mary Ann Vorwark, many cousins and a host of
friends. He was preceded in death by his parents.


To order memorial trees or send flowers to the family in memory of Mitch Allan Landucci, please visit our flower store.