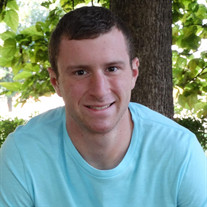 Michael was born on February 21, 1997 in Kansas City, MO to Glenn Alan and Sally Ann (Nigro) Soendker. He graduated from Blue Springs South High School in 2015. After high school, Michael attended the Missouri State University in Springfield, MO and graduated with a bachelor’s degree in Parks & Recreation Administration. He was a member of the Woods Chapel United Methodist Church in Lee’s Summit, MO. Michael was an Eagle Scout in Troop 255, obtained the rank of Firebuilder in the Tribe of Mic-O-Say, and also a member of the Order of the Arrow. He was a member of Sigma Chi fraternity. Michael was a Licensed Independent Insurance Agent. In addition to spending time with family, friends and pets, Michael enjoyed snowboarding, golfing, bicycling, and anything outdoors.

Michael was preceded in death by his paternal grandparents, Herbert and Bernice Soendker.


To order memorial trees or send flowers to the family in memory of Michael Glenn Soendker, please visit our flower store.