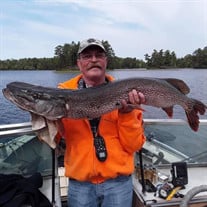 Memories of Mike and condolences for his family may be left at www.LedfordFamilyFH.com or on our Facebook Page. A private family service will take place at a later date. Memorials are suggested to the family in care of Sherry Fisher and a charity will be chosen in the near future. Cremation has been entrusted to the Ralph O. Jones Funeral Home, 306 S. 2nd St., Odessa, MO, 64076, 816-633-5524.

Mike was born on September 30, 1954, in Nevada, IA to Dale Louis and Lucy Marilyn (Howard) Fisher. He graduated from NESCO High School in Zearing, IA. Mike retired from Lake City Ammunition and worked part time for Napa Auto Parts. On June 23, 2001, Mike was united in marriage to Sherry Denise Titus in Odessa, MO. In addition to spending time with family and friends, Mike enjoyed hunting, fishing, and barbecuing.