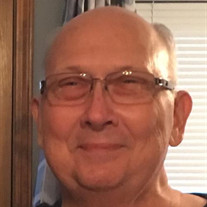 Michael William Lierman was born in Lexington, Missouri on October 15, 1953 and left this earth on February 21, 2019 to start his next journey to be with his Heavenly Father. He was the son of Benny and Dixie Lierman of Lexington. He has one sister, Linda Ingalls, Kansas City, who was his donor for his bone marrow transplant, and we thank her for the Gift of Life for her brother. Mike was a member of the Lexington Restoration Church of Jesus Christ but was currently attending the Liberty Christian Fellowship Church in Liberty.

Funeral services will be Monday, February 25, 2019 at 2:00 pm at Walker Nadler Fuller Funeral Home, Lexington. Visitation will be Sunday, February 24, 2019 from 4:00 until 7:00 pm at the Wentworth Military Museum, Lexington. Private inurnment will be at a later date. In lieu of flowers the family asks that memorials be made to the KU Bone Marrow Transplant Clinic or the Wentworth Museum.

Mike is survived by his wife of 44 years, of the home, Brenda; his two children, Amy and Andy and his wife Amber, who Mike considered his second daughter; and of course his three beautiful grandchildren, whom he loved with his whole being, Endsley Elizabeth, Landry Christopher and Breckin William (his namesake), all of Liberty; sister, Linda Ingalls of Kansas City, Missouri; two brother-in-laws, Bob Duncan and wife Teresa of Richmond and Ron Duncan and wife Beth of Higginsville; and several aunts, uncles, cousins, nieces and nephews; his Wentworth family and many, many friends.

Mike attended Lexington schools until his enrollment at Wentworth Military Academy as a freshman in high school. He continued his education at the Academy, graduating from high school in 1971 and Junior College in 1973. Mike held several positions in the Corp of Cadets and upon graduation was the Assistant Battalion Commander of First Battalion. He lettered in football all four years. He continued his education at Wentworth Military Academy and Junior College completing his college career at Central Missouri State University in 1975, with a Bachelor's Degree in Business Administration. Mike joined the staff of the Academy in 1980 as the Assistant Commandant of Cadets. He also served as an Admissions Representative during the summer months. He then served as a full-time Admissions Representative, until he was appointed Dean of Admissions. He then served as the Vice President for Operations. Mike then served as the Executive Vice President and Chief of Staff until his appointment to be the 14th Superintendent of Wentworth Military Academy and served in that capacity until May 2017, spending 36 years serving the Academy that he loved with all his heart.
Mike was affiliated with several civic and educational organizations. He was a member of the National Association of Admissions Counselors and the Midwest Boarding Schools Association. He served as the President of the Lexington R-V School District's Board of Education from 2004-2006 and as a board member from 2000-2004. He was a member of the Missouri School Board Association and the National School Board Association and the Missouri State Teachers Association. He served as a board member of the Lexington Area Chamber of Commerce and the Lexington Economic Development Committee. Mike was a member of the MOCAP grant writer's team in Lafayette County. He also served on the board of Lexington Sports and Fine Arts Boosters and was a member of the Lafayette County DARE program for drug awareness education. He was a member of Rotary International and served as a board member for the Lexington Rotary Club and also had volunteered with the Meals on Wheels Program.


To order memorial trees or send flowers to the family in memory of Michael William Lierman, please visit our flower store.