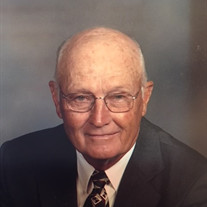 Melvin Martin Daniel Heman, 86, of Levasy, passed away November 1, 2018 at Monterrey Park Rehabilitation Center, Independence. Funeral service will be Wednesday, November 7, 2018 at 11:30 am at Ebenezer United Church of Christ, Levasy. Visitation will also be on Wednesday at the church from 9:30 until 11:30 am. Burial with Military Honors will be in Ebenezer Cemetery. Memorials may be made to the church.

Melvin was born October 1, 1932 in Levasy to Emil and Francis Dieckman Heman. He married Alice Anderton on January 30, 1955 in Levasy. Melvin served during the Korean War in the United States Army and then worked for over 40 years as a mechanical engineer for Black and Veatch as well as operating the family farm. He was a member of Ebenezer United Church of Christ, the American Society of Mechanical Engineers, the American Quarter Horse Association and Eagles Lodge 385.

Survivors include, his wife, of the home; children, Glen Heman and wife Kelley of Levasy, Bruce Heman and fiance Deborah of Metamora, Illinois and Jennelle Heman of Levasy; and grandchildren, Keighley and husband Ryan, Meghan and husband Kevin, Brayden and Dalton. Melvin was preceded in death by his parents; brothers, Arnold and Raymond Heman; sister, Bernice Telegemeier; and grandson, Blake Heman.


To order memorial trees or send flowers to the family in memory of Melvin Martin Daniel Heman, please visit our flower store.