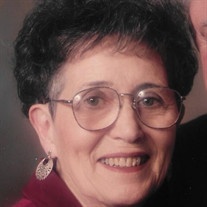 Mary Juanita (Whitworth) Scott, 94, of Odessa, Missouri, passed away on Tuesday, December 14, 2021, at The Parkway in Blue Springs, MO.

A visitation will be held from 1:00 p.m. to 2:00 p.m., on Tuesday, December 21, 2021, at the First Baptist Church of Odessa, 131 & OO Hwy, Odessa, MO, 64076. A funeral service will begin at 2:00 p.m., at the church. Interment will follow at the Greenton Cemetery in Odessa, MO. Memorials are suggested to American Cancer Society. Memories of Mary and condolences for her family may be left at www.LedfordFamilyFH.com or on our Facebook Page. Arrangements have been entrusted to Ralph O. Jones Funeral Home, 306 S. Second Street, Odessa, MO, 64076.

Mary was born on July 31, 1927, to Theodore and Gladys (Green) Whitworth in Lake Ozark, MO. She graduated from Odessa High School. On February 23, 1946, Mary was united to Owen Dale Scott in Olathe, KS. He preceded her in death on February 5, 2000. She worked as secretary to principal at the Odessa High School. Mary was a member of the First Baptist Church of Odessa.
In addition to spending time with her grandchildren, she enjoyed teaching Sunday School and playing bridge with friends.

In addition to her parents and husband, Mary was preceded in death by a sister, Shirley Justice; and two nephews, Danny and Billy Don Sanders.


To order memorial trees or send flowers to the family in memory of Mary Juanita Scott, please visit our flower store.