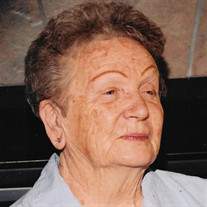 Mary was born on August 1, 1924 in Kansas City, MO to Francis “Frank” Marion Smith and Georgia Marie (Shivers) Smith. In 1941 she graduated high school in Kansas City, MO. On February 28, 1942 she married Allen Edward Pierce in Kansas City, MO. He preceded her in death on May 1, 1992. Mary worked at various places through her life, she started as a Rosie Riveter during World War II, then she worked for Western Electric, Mary was a bookkeeper for Lake Lafayette and she retired from Feldman’s in Odessa, MO. Mary was a member of The Worship Center in Harrisonville, MO and the Odessa Saddle Club. In addition to spending time with family and friends, Mary enjoyed gardening and traveling.

In addition to her parents and husband, Mary was preceded in death by a brother, Francis Marion Smith, Jr.


To order memorial trees or send flowers to the family in memory of Mary Catherine Pierce, please visit our flower store.