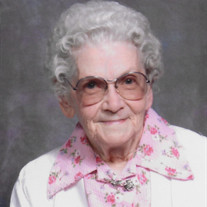 Martha was born on March 1, 1920 in Portland, Oregon to Anton and Norma (Wise) Anderson. She lived in Portland area until age 7 when her father moved the family to Ellensburg Washington. She attended school in Ellensburg. Martha met her future husband Adolph Kroeger at church there. They were wed January 5, 1941 and moved to Seattle Washington where their son Gerry Kroeger was born. They moved to Edmonds Washington where they built their home. While living in Edmonds both daughters Lorraine and Silvia were born into the family. Martha worked at Segal Memorial nursing home in Edmonds WA in the dietary department. She enjoyed her work and getting to know the residents. Adolph and Martha moved to a farm in Ellensburg WA in 1956. Martha joined the Reorganized Church of Jesus Christ of latter-day saints in 1957. She was a member of the Grange Organization. She and Adolph were divorced in 1964. She enjoyed the outdoors hiking and camping in God’s creation. She later went to work for the Kittitas Valley Community Hospital in Ellensburg, Washington as a dietary aid. She worked there until retirement at age 63. After retiring she moved to Pullman WA for 4 years to be with her daughter and family. However, she longed for Zion and moved to Missouri in the fall of 1987 and became a member of the Odessa Restoration Branch, Church of Jesus Christ of latter-day saints. She loved the Lord with all her heart and used her artistic talents to share that love with others by making colorful charts and illustrations. In addition to spending time with friends and her church family who supported her to the end, Martha enjoyed drawing, reading and sewing.

In addition to her parents, Martha was preceded in death by one son, Gerry Gene Kroeger; and one daughter, Lorraine Norma Fletcher.


To order memorial trees or send flowers to the family in memory of Martha Margreta Kroeger, please visit our flower store.