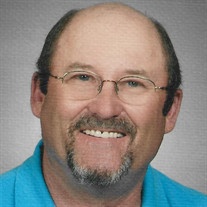 Mike was born April 28, 1944 in Barrett, KS to Marshall M. and Hazel (Myers) Haskin III, he was the middle of seven children and by far the orneriest one. His incredible sense of humor and fun will be missed by everyone who knew him. Raised in Frankfort, KS he grew up farming and at the age of 14 yrs. went on the wheat harvest with a crew from his hometown. They cut wheat from Oklahoma to South Dakota that summer. When time for school got close, he was sent home alone driving a truck with a 14’ wheat header tied to the top from South Dakota back to Frankfort. After high school he attended Junior College in Fairbury, NE on a football scholarship before transferring to K-State. After obtaining his degree he came to Johnson Co., KS and began his teaching career. While teaching at Cure of Ars Catholic school he was instrumental in starting their Physical Education program. In 1969 he married Lynn Schaefer from Vermillion, KS. Together they had three children Hollyanna (Woody) Bates, Breckenridge, CO, Marshall Corey Haskin (Erin O’Connor), Prairie Village, KS and Charity (Rob) Mayes, Durham, ME. They later divorced. In 2002 he met Ariann Stewart from Port St. Joe, FL and in 2004 they were married. She survives of the home. During his time here Mike was a successful businessman, starting, owning, and operating several successful businesses including two truck lines and a factoring company. Mike became President of the Kansas Motor Carriers during the 1980’s when deregulation of the trucking industry was taking place. He was never afraid to try something new or of challenges. One thing is for sure, if it had a motor, Mike could drive it. He farmed extensively, raised cattle and somehow in there found the time to learn to fly. He was an excellent pilot, owning several small airplanes. By 2017 he was down to one truck line (HIT, Inc.) and decided to retire. He sold it after 47 years and had been enjoying retirement. Preceding him in death were his parents and his oldest brother Harold Haskin. Survivors include his sister-in-law Kay Haskin, Frankfort, KS and siblings George (Dorothy) Haskin, Onaga, KS, Sue Grauer (Dennis Martin), Marysville, KS, Beth (John) Horigan, Frankfort, KS, Mary Jane (Tom) Keating, Jacksonville Beach, FL and Marsha (Mark) Barrett, Lenexa, KS as well as seven grandchildren (whom he was very proud of), and his dog Homer.


To order memorial trees or send flowers to the family in memory of Marshall "Mike" Haskin IV, please visit our flower store.