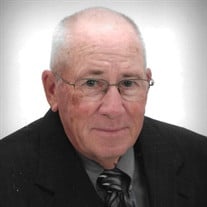 Marion’s visitation will be held from 10:00 a.m. to 11:00 a.m. on Friday, January 21, 2022, at Ralph O. Jones Funeral Home, 306 S. 2nd Street, Odessa, MO 64076., 816-633-5524. A funeral service will begin at 11:00 a.m. Immediately following service, burial at Concord Cemetery, Bates City, MO. Memorials are suggested to Community Bible Church or St. Jude Children’s Research Hospital. Family will be requiring all in attendance to wear masks and observe social distancing. Memories of Marion and condolences for his family may be left at www.LedfordFamilyFh.com or on our Facebook page.

Marion was born on December 8, 1933, in Independence, MO to George Evan and Chloie May (Eldred) Turner. He graduated in 1952 from Oak Grove High School. Marion served in the United States Navy from 1956 to 1958. He retired in 1997 from Honeywell (formerly Bendix / Allied Signal) after 37 years of service. On September 6, 1958, he married Velva A Frerking in Alma, MO. Marion was a member of the Community Bible Church, Odessa MO. In the early 1980’s he started competing in horseshoe tournaments, rising quickly through the ranks. Marion won the Missouri State Championship in 2003 and 2009 and was inducted into the Missouri Horseshoe Pitching Hall of Fame in 2012. In addition to spending time with family and friends, Marion enjoyed horseshoe pitching, fishing, and golfing.

In addition to his parents, Marion was preceded in death by three brothers, Burton, George B, and Lee Wayne Turner, and one sister, Golda Umstattd.


To order memorial trees or send flowers to the family in memory of Marion O Turner, please visit our flower store.