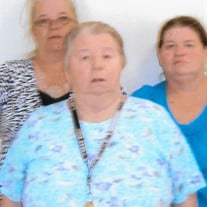 Marian Estelle Robinson, 90, of Lexington, passed away February 12, 2020 at her home. A funeral service will be Friday, February 14, 2020 at 11:00 am at the Walker-Nadler-Fuller Funeral Home, Lexington. Visitation will also be on Friday at the funeral home from 10:00 until 11:00 am. Memorials may be made to the family. Memories and condolences may be left at www.ledfordfamilyfh.com.

Marian was born July 20, 1929 in Caribou, Maine to Raymond Dibiase and Evelyn (Semmes) Fehn. After graduation she served as a pilot in the United States Air Force during World War II. She later worked as a Certified Med Tech at Lafayette Manor. Marian married Harold Richardson October 2, 1956, they later divorced but remained friends. Marian was a member of the Assembly of God Church and enjoyed word puzzles, quilting, crafts and ceramics.


To order memorial trees or send flowers to the family in memory of Marian Estelle Robinson, please visit our flower store.