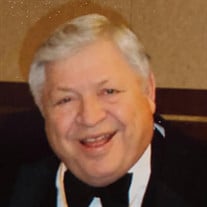 Louis Anthony Mautino, 85, of Lexington passed away September 7, 2021 at Belton Regional Hospital, Belton, Missouri. Visitation will be Monday, September 13, 2021 from 1:00 until 2:00 pm at Immaculate Conception Catholic Church, Lexington. The Rosary will be prayed at 2:00 pm, followed by Mass of Christian Burial at 2:30 pm. Burial with Military Honors will be in Memorial Park Cemetery, Lexington. Memorials may be made to the Knights of Columbus Council 4300 or Boy Scout Troop 318. Memories and condolences may be left at www.LedfordFamilyFH.com. Arrangements have been entrusted to Walker-Nadler-Fuller Funeral Home, 1720 South Street, Lexington, MO 64067, 660-259-2245.

Louis was born August 18, 1936 in Lexington to John and Mary (Vedda) Mautino. He graduated from Lexington High School and earned an Associate's Degree from Wentworth Military Academy. Louis was a veteran of the United States Navy and served during the Korean War. On August 15, 1970 he married Marilyn Hesler in Lexington. They recently celebrated their 51st Wedding Anniversary. Louis worked as an Air Traffic Controller for 47 years, and at the time of his retirement was the oldest active Air Traffic Controller in the United States. He was a member of Immaculate Conception Catholic Church and the Knights of Columbus. Louis held many different roles within the Knights of Columbus, including, Grand Knight, State Deputy, Master of the 4th Degree, Supreme Warden, Supreme Director and Consultant to the Supreme Knight. Louis was an Eagle Scout and adult leader in the Boy Scouts of America, recipient of the Silver Beaver Award (Boy Scouts), and a Sagamore in the Tribe of Mic-O-Say. He was a member of the Elks Lodge and enjoyed hunting, fishing and Mizzou football.

Louis was preceded in death by his parents; a sister, Gloria Danner; and nephews, Marc Barnes and Adrian Danner.


To order memorial trees or send flowers to the family in memory of Louis Anthony Mautino, please visit our flower store.