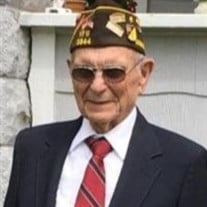 Leonard Bernard Crowl, Jr., 96, of Odessa, Missouri left this world to be with his heavenly Father, while surrounded by family at his home on Monday, May 16, 2022.

A visitation will be held Saturday, May 21, 2022 from 3:00 pm to 5:00 pm at Ralph O. Jones Funeral Home. A private family inurnment will take place at the Missouri Veteran's Cemetery in Higginsville, Missouri.
Memorials are suggested to Crossroads Hospice and may be left in care of Ralph O. Jones Funeral Home, 306 S. 2nd Street, Odessa, MO, 64076, 816-633-5524. Memories of Leonard and condolences for his family may be left at www.LedfordFamilyFH.com or on our Facebook Page.

Leonard was born November 6, 1925, in Independence, MO to Bernard and Saphronia F. (Tousley) Crowl. He graduated from William Chrisman High School in Independence, MO. On October 15, 1948, he married Berdina Mae Miller in Independence, MO. After his wife’s death in 2015, Leonard met and married his new wife, Margaret Brockman in Wilburton, OK on February 14, 2018. Throughout his life, Leonard experienced many different careers. At 18 years of age, Leonard began his journey in the navy as a Seaman and ended at Motor Machinist Mate Second Class. As WWII progressed Leonard held the position of diesel mechanic on a brand-new Landing Ship Tank (USS LST-949). As a civilian, Leonard returned home to a farm in Lowry City, MO. He then moved to Independence, MO, where he found work at Greener Harvester making combines. Leonard then worked for a Kansas City Streetcar Company, then Union Wire Rope making cables for various machinery, light poles, and bridges. He later worked for Standard Oil Refinery for nine years. In April on 1959, Leonard and his wife, Berdina, bought a farm in Odessa, MO. Leonard got a job as a Night Watchman for the City of Odessa for a year, and after a farming accident took his left hand, he began working for the Highway Patrol at the weigh station. While working at the weigh station, Leonard started Hilltop Greenhouses and sold his produce and plants to K-Mart and other businesses. Throughout his life, he has always had a heart for service. He volunteered for Native American Missionary Services traveling from Canada to North Dakota and other parts of the United States. He also served in prison ministry in Oklahoma. Leonard also helped the local senior center with fundraising, serving on the board, and keeping the community informed about the center’s needs. He recently received recognition by the State of Missouri for his service to his senior center. In March of 2016, Leonard received the Veterans Service Award by Governor Peter Kinder and later in August 2016, received the Missouri State Society Daughters of the American Revolution Patriot of the Month. Additionally, he is an ordained minister for the Restoration Branch RLDS Church. Leonard was a friend to many and loved by all. Never would you walk past him without being enveloped by his kind words of love, stories about his childhood, and time in the Navy during WWII. He gave his family selfless, unconditional love, and spent many special moments making memories with his children and grandchildren. In addition to growing the family farm with his daughters and son for more than 50 incredible years, he enjoyed trout fishing at Roaring River State Park, and that became one of his fondest memories with his son and grandchildren.

In addition to his parents, Leonard was preceded in death by his wife, Berdina Crowl; a sister, Rilla Durbin-Anderson a brother, Guy Crowl; and a daughter, Susan Burney.


To order memorial trees or send flowers to the family in memory of Leonard Bernard Crowl Jr, please visit our flower store.