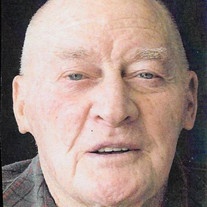 Lawrence Norman Shier, 90 of Mayview, Missouri passed away on Tuesday, December 05, 2017 at the Missouri Veterans Home in Warrensburg, Missouri.

Lawrence was born on May 9, 1927 in Mayview, MO to Alfred Willard and Elberta (Stockton) Shier. He served in the United States Army. Lawrence received the World War II Victory Medal. On March 23, 1948 he married Violet “Louise” (Lester) Shier in Higginsville, MO. She survives of the home. Lawrence was a member of the Mt. Tabor United Methodist Church. He was a lifelong farmer, raising various livestock and crops. Lawrence retired in 2013. In addition to spending time with his family and friends, Lawrence enjoyed coon and bird hunting but most of all raising and training horses was his passion.


To order memorial trees or send flowers to the family in memory of Lawrence Norman Shier, please visit our flower store.