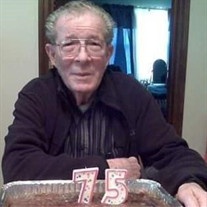 Per Tom’s request cremation with no services. Memories of Tom and condolences for his family may be left at www.ralphojones.com or on our Facebook Page. Cremation has been entrusted to the Ralph O. Jones Funeral Home, 306 S. 2nd St., Odessa, MO, 64076, 816-633-5524.

Tom was born on April 29, 1938 in Cole County, MO to Lawrence William and Nannie Alice (Smith) Schmidt. On April 3, 1956 Tom enlisted in the United States Air Force and served in Vietnam. On February 8, 1960 he was Honorably Discharged. Tom married Beverly “Joyce” (Steinmetz) Schmidt on January 31, 1964 in Jefferson City, MO. Joyce survives of the home. Tom worked in Maintenance Engineering for different health institutions, but retired after 20 plus years from Independence Regional Health Center in Independence, MO. Tom loved spending time with his grandchildren and great-grandchildren. In addition to spending time with his family and friends, he enjoyed collecting and antique cars as well as researching and learning the history of the military.

In addition to his wife Joyce, Tom is survived by two daughters, Cheryl Schmidt of Springfield, MO and Vicki Schmidt of Independence, MO; five grandchildren and two great-grandchildren; many nieces and nephews.

In addition to his parents, Tom was preceded in death by a grandson, Thomas “Smitty” Schmidt and two granddaughters; two brothers, Earl Schmidt and John Schmidt and a sister, Margie Crocker.


To order memorial trees or send flowers to the family in memory of Lawrence Thomas "Tom" Schmidt, please visit our flower store.