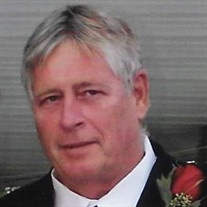 Larry Westerhold, 63 passed on Friday, July 14, 2017 at St Mary's Hospital, Blue Springs, Mo. Funeral services for Larry will be held on Wednesday, July 19, 2017
at 10:00 am at the Ralph O. Jones funeral home, Odessa, MO. Visitation for Larry will be held on Tuesday, July 18, 2017 at the funeral home from 5 to 7 pm. Burial will be in the Odessa Cemetery. In lieu of flowers memorials may be made to the Odessa V.F.W.

Larry Dean Westerhold was born on June 4, 1954 in Warrensburg, Mo. to Donald and Maxine E. Fox Westerhold. He married Dawn Tonette Miller on May 24, 1985 in Odessa, MO. She preceded him in death on July 30, 2016. Larry was the owner-operator of Larry Remodeling Service, Odessa Mo. which he operated for 20 years in addition to being a farmer.

Larry is survived by his children, Justin Westerhold, Odessa, Damon Westerhold and wife, Brandie, Odessa, Michael Miller and wife Sara, Holden, Michelle Runnels, and husband Tim, Independence, and Misty Westerhold, Odessa. There are 13 grandchildren.
Larry was preceded in death by his parents, his wife and his sister.


To order memorial trees or send flowers to the family in memory of Larry Dean Westerhold, please visit our flower store.