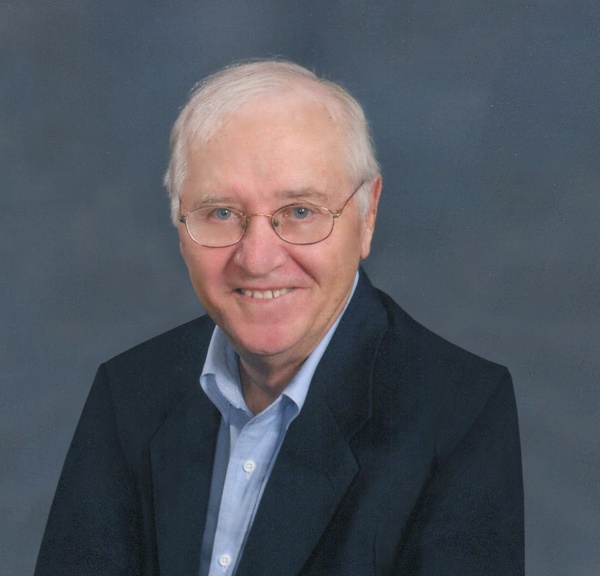 Larry Leon “Corky” Nienhiser, 83, died Thursday, July 14, 2022, at home, surrounded by his family. Cork was born April 3, 1939, at Fitzgibbon Hospital, Marshall, Missouri. The second of three children born to Elmer and Selma (Kalthoff) Nienhiser of Blackburn, Mo., he was baptized on April 23, 1939, at Zion Lutheran in Blackburn, and confirmed in the faith at Zion on March 29, 1953.

As a young boy, he got his nickname because he had a cap like Corky from the Our Gang films. He attended the one-room Zion Lutheran School in Blackburn through eighth grade, then graduated from Blackburn High in 1957. He earned a BS in agriculture in 1961 from the University of Missouri-Columbia. After college, he was recruited to a quality control position at H. J. Heinz in Muscatine, Iowa. He married his high school sweetheart, Frances Buck, at Zion on October 13, 1962. While living in Muscatine, they helped found Our Savior Lutheran Church.

In 1965, tired of never seeing the sun, Cork quit Heinz and applied to MU’s veterinary school. Not accepted at first, he was undaunted and began graduate work, taking classes in Ag-Chem. He applied again successfully in 1966. While pursuing his DVM, daughter Jill was born in Columbia in December 1969 and adopted into their family in January 1970. Corky graduated that spring and took a veterinary intern position in Higginsville, Mo. Daughter Susan was born in February 1972.

Cork moved the family to Lexington, Mo. and opened a temporary clinic. He and Frankie bought their land in 1972, where Frankie still resides. They lived first in the property’s hulking old farmhouse, and Jill and Susan had a magical childhood on their “little farm in town,” with barns to play in, fruit trees and berry bushes to snack from, a “holler” and railroad tracks to explore, and a menagerie of cats, dogs, pigs, goats, horses, cows, chickens, and ducks.

Cork and Frankie built Lexington Veterinary Clinic on their property and opened in 1976. With Frankie as office manager, the two of them ran the clinic until October 1998. He focused his practice on cats, dogs, cows, and hogs. He took classes at the Lafayette County Vo-Tech school to learn computer programming and set up an accounting system for the clinic.

A man of many talents, he built swings and toy boxes for the girls and a dollhouse with hundreds of hand-whittled wooden shingles. This was good practice for when he later designed the new house that he and Frankie built in 1983, where he lived until his death. He taught Jill and Susan to ride bikes and hit softballs and neuter dogs. He loved to be outdoors working and telling his daughters to pick up sticks so he could mow. He and Frankie kept a vegetable garden for many years. In the winter he would get bored and want something to do with his hands. Frankie put needle and embroidery hoop in them, and soon each of the girls had a beautifully embroidered quilt. He went to imaginative lengths to keep the magic of Santa Claus alive.

The Nienhisers joined Grace Lutheran Church in Lexington. They attended nearly every Sunday, and rarely missed any church event. Among other roles, Cork served as treasurer for decades. He was ever an example of faithfulness for his family. He also felt an obligation to give back to the community and so ran for the Lexington School Board, serving three terms.

As he moved toward retirement from veterinary medicine, he returned to his farming roots. He formed C&C Farms with nephew Cody Schuette, raising cattle. After several years farming together, they each went their own way. Cork switched to farming grain. He truly loved the farm. Even after retiring from actively farming, he managed the farm operations while renting out the land.

Cork and Frankie enjoyed traveling during their retirement throughout the American West, the East Coast and Mexico. They took the kids along for an unforgettable 50th anniversary trip to Hawaii. His genealogical research led to trips to the Nienhisers’ ancestral homes in Buer, Germany and Bear Creek, Indiana, where his forebears first emigrated before coming to Missouri. He kept his hands busy as long as he could, such as teaching himself via YouTube videos to re-cane the chair seats Frankie’s father had once caned.

In these later years, Cork indulged his youthful dream by buying a Harley Davidson, and soon came under the influence of a local biker gang. The Old Wild Hogs, based in Lexington, Mo., were known to drive their motorcycles to local fairs and beer gardens and generally carouse. Cork also had a cultured side, as evidenced from his long-running membership in the elite Lexington POETS Society (“Put Off” Everything, Tomorrow’s Saturday), which met weekly on Fridays for coffee.

Visitation will be Monday, July 18, 2022 from 6:00 until 8:00 pm at Walker-Nadler-Fuller Funeral Home, Lexington.  A funeral service will be held Tuesday, July 19, 2022 at Grace Lutheran Church, 806 South Business Highway 13, Lexington at 10:00 am.  Burial will follow at Zion Lutheran Cemetery, Blackburn, Missouri.  In lieu of flowers, memorials may be made to Grace Lutheran Church, Friends of the Friendless Animal Rescue and Shelter or a charity of the donor’s choice.  Memories and condolences may be left at www.LedfordFamilyFH.com.  Arrangements have been entrusted to Walker-Nadler-Fuller Funeral Home, 1720 South Street, Lexington, MO  64067, 660-259-2245.

To order memorial trees or send flowers to the family in memory of Larry Leon "Corky" Nienhiser, please visit our flower store.