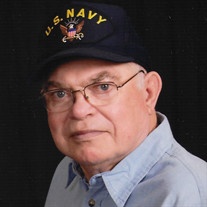 Larry Eugene Jones, 77, of Odessa, Missouri passed away on Thursday October 11, 2018 at the Truman Gardens Nursing Home in Independence, MO.

Larry was born on August 31, 1941 in Chillicothe, MO to Eugene Allen and Lena Mae (Shobe) Jones. On May 26, 1960 he enlisted in the United States Navy and was Honorably Discharged on March 27, 1964. Larry retired from the General Motors Leed’s Plant in Kansas City, MO. On June 18, 1988 he married Glenda Perline (Stiverson) Jones in Independence, MO. She survives of the home. Larry was a member of the First Baptist Church in Odessa and was a lifetime member of the V.F.W. Post 5675 in Odessa. In addition to spending time with family and friends, Larry enjoyed woodworking, dancing, fishing, playing cards, games, and swimming.

Larry was preceded in death by his parents.


To order memorial trees or send flowers to the family in memory of Larry Eugene Jones, please visit our flower store.