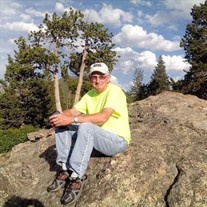 A visitation will be held from 12:30 p.m. to 2:00 p.m. on Wednesday, September 8, 2021, at Ralph O. Jones Funeral Home, 306 S. 2nd Street, Odessa, MO, 64076, 816-633-5524. A funeral service will be held at 2:00 p.m. at the funeral home. Interment will be at the Greenton Cemetery, Odessa, MO. In lieu of flowers, memorials are suggested to Life Point Church or to the family (in care of Sharron Christy) for a charity to be decided and may be left in care of the funeral home. Memories of Larry and condolences for his family may be left at www.LedfordFamilyFH.com or on our Facebook Page.

Larry was born on October 15, 1947, to Alonzo Best and Ruth Lacreet (Stephenson) Christy in Independence, MO. He was a 1965 graduate from Odessa High School. On July 20, 1968, Larry was united in marriage to Sharron Kay Parsons in Odessa, MO. He worked as a Press Operator for Hallmark Cards for 37 years. After an early retirement at age 55, Larry started painting houses and working for Barker Construction with final clean-up. He was a member of Life Point Church of Odessa. In addition to spending time with family and friends Larry enjoyed woodworking, the outdoors, going to car shows, and occasionally entering his Chevy Silverado and Camaro. Larry also won several trophies and liked going to the All-Truck Nationals.

Larry was preceded in death by his parents.
To order memorial trees or send flowers to the family in memory of Larry Eugene Christy, please visit our flower store.