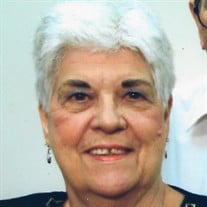 Cremation has been entrusted to Ralph O. Jones Funeral Home, 306 S. 2nd Street, Odessa, MO, 64076, 816-633-5524. An inurnment will take place at the Greenton Cemetery at a later date. Memorials are suggested to Calvary Baptist Church. Memories of Katherine and condolences for her family may be left at www.LedfordFamilyFh.com or on our Facebook Page.

Katherine was born on July 16, 1923 in North Little Rock, AR to William Newton and Emma Laura (Lee) Carr. After graduating from Little Rock Central High School in 1941, she attended Peabody Business School and fulfilled her career doing secretarial work for Sears and Roebuck for 29 years. On October 31, 1942 Katherine was united in marriage to Myrul Barker in Little Rock, AR. He preceded her in death on November 11, 2012. She was a charter member of the Calvary Baptist Church in Odessa, MO. In addition to spending time with her friends and relatives, Katherine enjoyed playing cards, sewing, tailoring, making her clothing, and being a member of the Concord Homemaker’s Club. She was also a member of the Shaw Club for over 60 years.

Survivors include a sister in law, Norma Jean Murry of Odessa, MO; and a host of nieces and nephews.

In addition to her husband, Myrul, Katherine was preceded in death by her parents.


To order memorial trees or send flowers to the family in memory of Katherine Lorene Barker, please visit our flower store.