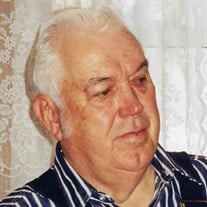 Joe was born on August 22, 1933 in Grain Valley, MO to Hubert Henry and Elizabeth Susie (Wilson) Halsey. He enlisted in the United States Army and served from November 5, 1953 until he was honorably discharged on November 4, 1955. Joe married Sandra (Stark) Halsey on December 25, 1963 in Odessa, MO. He retired from the IUOE Local 101 in Kansas City, MO. Joe worked as a heavy equipment operator for various pipeline companies. He also was a farmer and worked on the family farm as well. Joe was a member of the Mt. Hope Masonic Lodge 476 and the Shriners. In addition to spending time with family and friends, Joe enjoyed watching westerns and doing activities with his grandchildren.

In addition to his parents, Joe was preceded in death by a brother, Don Halsey and three sisters, Elva Wakeman, Francis Wilkinson and Bernice Smith.


To order memorial trees or send flowers to the family in memory of Joseph "Joe" Charles Halsey, please visit our flower store.