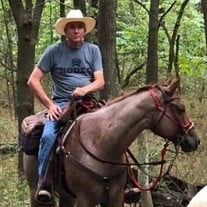 John was born September 29, 1969 in Kansas City, Missouri to Norman Hicklin, Sr. and Lois (McDaniel) Hicklin. He worked for Langley Recycling in Kansas City, Missouri. John married Robin Ann Williams on July 3, 1993 in Lexington. In addition to spending time with his family, grandkids and friends he enjoyed trail riding and fishing.


To order memorial trees or send flowers to the family in memory of John Francis Hicklin, please visit our flower store.