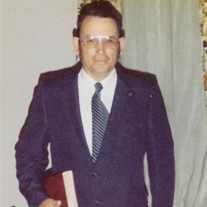 John William Cooper, 89, of Odessa, passed away December 4, 2018 at his home. Funeral services will be Monday, December 10, 2018 at 2:00 pm at Ralph O. Jones Funeral Home, 306 South Second Street, Odessa. Visitation will also be on Monday at the funeral home from 12:00 until 2:00 pm. Burial will be in McKendree Cemetery, Odessa. Memorials may be made to New Beginning Free Will Baptist Church or McKendree Cemetery.

John was born January 7, 1929 to John Mark and Elsie Purvis (Phillips) Cooper. He married Eva May Kincaid September 6, 1947 in Climax Springs, Missouri. John worked for Allis Chalmers for 29 years, retiring in 1984. He was a member of the United Steelworkers Union. He was a farmer and raised Belgian Horses. John was ordained a minister in 1981 and served at Free Will Baptist Churches in Climax Springs and Kaiser, Missouri.


To order memorial trees or send flowers to the family in memory of John William Cooper, please visit our flower store.