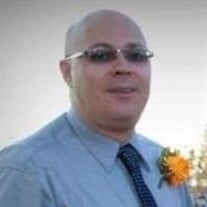 Jeff was born on July 2, 1968, in Lexington, MO to Bud and Christy Ann (O’Dell) Jones. He enlisted in the Army National Guard and later served in the United States Army. Jeff was a Veteran of Desert Storm. In the mid 90’s Jeff began his career as a Police Officer serving the towns of Lexington, Bates City, and Odessa for over 20 years. On June 10, 2006, Jeff was united in marriage to Brenda Kay Eckhoff in Odessa, MO. She survives of the home. In addition to spending time with family and friends, Jeff enjoyed fishing, traveling, especially to Miami during the winter, and was an avid Mizzou, Royals and Chiefs fan.

Jeff was preceded in death by his father, Bud Jones and a stepson, Michael Dean Wilckens, Jr.


To order memorial trees or send flowers to the family in memory of Jeffery Brent Jones, please visit our flower store.